Many believe Tel-Aviv and NYC have a lot in common. Traffic congestion is a trademark; the under-tunnel train will soon be complete. And it never sleeps. Bars close at 4am only to reopen two hours later. People stay up late and the streets are stuffed with young Israelis, most of whom hipsters who are utterly in-love with the city and would pay any price to live in its center—the epicenter of fashion, technology, innovation, gourmet and more. Even the worst apartments in the area—the kind that barely passes public regulation for safety—are perpetually inhabited. And like other major cities, streets are littered with sex pamphlets and cigarette butts and other slimy black and brown masses that may have once been newspapers or used clothes. It’s messy. And smelly, sometimes in a good way.

One of my favorite streets is Dizengoff, where the pavement is painted with a chunky red texture made of berries that pedestrians squish and squirt, filling the atmosphere with natural sweet perfume. I get dizzy sniffing the air and thank the old ficus trees for their fruit and addictive aroma that never fails to send me back to my childhood, when I walked the streets with my grandfather. The trees also offer delightful shade during the day and a delightful dinner for fruit bats during the night. The bats zip between the trees like porpoising dolphins, affording only occasional glimpses under the yellow streetlights. They’re a lot of fun to watch.

Then there’s the HaArba’a street, Rothschild street, and many others, hosting dozens of gourmet restaurants, ranging in price, style and taste: French, Japanese, Argentinian, Cuban, Polish, Russian, Turkish, Moroccan, American—some run by chefs, others by people native to the traditional flavors of their home country. The smell leaving the restaurants unmercifully assaults your taste buds. A culinary heaven.

Other areas smell differently. It is not uncommon to get an obnoxious whiff of urine going down a busy street. You find the old stench near bars, when drunks leave the loud music and can’t help but relieve themselves on the floor. It’s common. It hits you hard, so you have to quicken the pace to cleanse your nostrils. Walking fast, however, poses a real threat. Most of the city floors are cracked and bent and in constant need of replacement. Some due to natural erosion, others thanks to—again— the old ficuses that have grown so mighty they force the earth to meet their needs. The roots are thick and often climb over the pavement like in old children books. But the trees are old and sentimental; locals will be first to uproot.

Looking up from the pavement there are many squared, gray, apartment buildings squeezing the roads from both sides. The walls are old and stained with time and bat waste. They are also covered with tiny individual porches, sometimes large enough to accommodate three people. Many residents use the space to dry laundry on thin wires. Others use it to smoke cigarettes, hash, and marijuana.

The city is overbuilt, oversmoked and overpopulated. But more than anything, it is loved.

“When I was a child so many streets in Tel-Aviv were still covered in beach sand,” my mom says. “We used to build sandcastles–it was so much fun. Unfortunately, in the late 50’s the roads were finally paved. It was such a sad time for me.” Looking at old pictures of her youth, one can barely recognize the city.  Within a few decades, Israelis turned an oceanic white powder into one of the most famous, lively cities on earth.

But the memories remain. 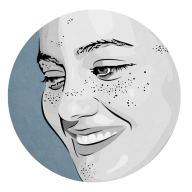 Join the discussion and tell us your opinion.

As lovely to read the second time